Why I Love American Elf

I love James Kochalka. I've read American Elf, his daily autobiographical webcomic, for years now, and I'd like to take a few words to explain why it's one of the most important strips on the internet and a highly significant accomplishment for comics in general.

It seems easy for some people to shrug off James's work; they think his family-friendly work (such as Johnny Boo) is too saccharine, while they assume his highly adult work (such as SuperFuckers) is just puerile and rude. Both criticisms, in equal parts, can be thoughtlessly applied to American Elf, and, in my opinion, would hopelessly miss the point.

The beauty of American Elf comes entirely from the fact that it ranges wildly from juvenile to serious, from childlike to sexy, from fluffy to deadly serious. Any given day's update may find a situation ranging from totally dull to deadly serious. It depends, like real life always does, on what significant event makes that day unique.

And, again, the fact that each day's strip can be wildly divergent in tone and seriousness is not the point.

The point that I realized that American Elf is significant in the juxtaposition of banality and drama came when James opened up his archives. Alone in my apartment one day, I carved through entire years of this man's life, watching his children be conceived, born, and develop their own personalities. I watched his love for his wife lengthen and deepen through fights and sex and romance and rides around town. I watched his father get older and sicker. I watched, and smiled, and frowned, and finally a swelling in my heart made me realize that I had experienced a chunk of real, actual existence, a real life, told entirely through designs and colors.

James' work means a lot to me. I think American Elf is the best webcomic on the internet, Johnny Boo is my nephew's favorite comic, and Hulk vs. the Rain is one of the funniest comics I have ever read. Here is a drawing of James' avatar in American Elf: 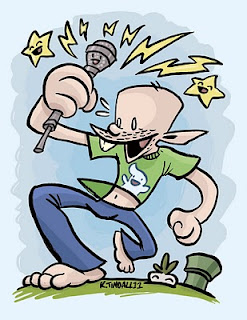 As ever, my own webcomic That's So Kraven! is updated with a new strip. Check it out here.